Saratoga Springs is a year-round destination filled with world-class attractions, exquisite restaurants, upscale retail and boutique shopping, and a vibrant nightlife scene. Saratoga has much to offer meeting groups, from unique boutique inns and quaint bed and breakfasts to full-service conference venues and nationally recognized hotels. The city boasts an eclectic mix of meeting options, including historic museums, sporting venues and modern properties. Saratoga also offers a thriving arts and cultural scene, exceptional fine dining, and world-class golf to create the perfect setting for combining business and pleasure. Nestled between New York’s Capital Region and the picturesque Adirondack Mountains – just a short 3-hour drive from large metro areas like New York City, Boston and Montreal – Saratoga is the perfect location for meetings in the North East!

Health and thoroughbred horse racing runs deep in our roots, but hospitality is where Saratoga shines. The City of Saratoga offers nearly 3,700 hotel rooms and 160,000 square feet of meeting space anchored by the Saratoga Springs City Center, a 32,000-square-foot unique, full-service convention facility. You’ll get to choose from a variety of unique venues from spacious museums and Victorian buildings to state-of-the-art meeting facilities and hotel properties.

Downtown Saratoga Springs is within walking distance to countless restaurants, boutique shops, galleries, lively bars and more. In fact, Broadway in Saratoga was named one of the top 10 main streets in the country according to USA Today’s 10Best, in addition to being recognized as the happiest city in the state with the most restaurants per capita.

Saratoga has long been a cultural hub as the summer home of the New York City Ballet and Philadelphia Orchestra at Saratoga Performing Arts Center. The historical Saratoga Race Course, National Museum of Racing, National Museum of Dance, Saratoga Automobile Museum, natural mineral springs, and the renowned Saratoga Battlefield are among some of Saratoga’s iconic attractions.

Getting here is easy

Whether you're getting to Saratoga by car, train or plane, your trip will be seamless from start to finish. A conveniently located Amtrak station is approximately 1.5 miles from downtown Saratoga Springs, with a 40-minute drive to the Albany-Rensselaer Amtrak Station. In addition, Saratoga is only 30 minutes from Albany International Airport. Our businesses are motor-coach friendly and look forward to your visit! 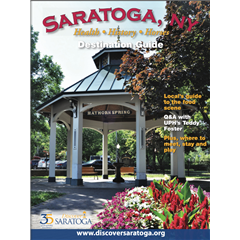 Where to eat, play and stay in Saratoga, NY! Download our 2020-2021 Saratoga Destination Guide for everything you need to know about visiting Saratoga Springs. Printed copies of the guide are available at local businesses, hotels, the Albany International Airport, Amtrak and more!
Learn More