Meet me in CLE

Food trucks? Check. Funky venues? Got ‘em. Volunteer opps? Done. Destination Cleveland swanks a dedicated convention services team at the ready to make your wildest convention and meeting’s dreams a reality. Better still, we’ve got the goods to make your convo the real deal in The Land:

All work and no play? Nah, not in Cleveland.

Let’s be honest, when the meeting’s over, that’s when the real fun gets started.

Nosh. Nibble. Nom. If your attendees are the hunt for chain restaurants and find-anywhere-fare, Cleveland’s probably not the best option. But if your attendees crave innovative menus and locally sourced cuisine — whether they’re tipping back craft cold ones in old-school dives or behind champagne flutes at white tableclothed celeb chef spots — Cleveland is the place to level up their convention experience.

Amp it up. A visit to Cleveland without a stop at the Rock & Roll Hall of Fame is practically unlawful around here. Take a gander at rock’s eccentric past in the gorgeous, glass-enclosed museum along Lake Erie. If those notes hit too heavy, catch a performance by the world-class Cleveland Orchestra or a Broadway blockbuster at Playhouse Square, the nation’s largest performing arts district outside of NYC.

From the Dawg Pound to Loudville. Clevelanders are a passionate bunch when it comes to sports. Catch a post-game firework show above the ballpark at Progressive Field. Experience the fieriness from raucous Browns fans at FirstEnergy Stadium. Or, scope the intense energy of a Cavs game at Quicken Loans Arena.

Art attack. Never laid eyes on a real Picasso? Now’s your chance. The Cleveland Museum of Art, one of the most prestigious art museums in the country, offers free admission to its permanent collection all year round. Too swanky? Browse modern art inside a turn-of-the-century transformer station, meet local crafters inside a rehabbed automobile factory or just take a turn through University Circle, the most concentrated square mile of arts and culture in the nation. 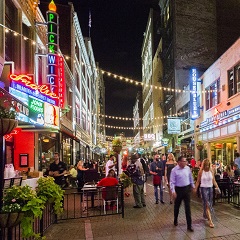 With its strings of overhead light bulbs, patio seating and ever-present street life, pedestrian-friendly East 4th Street exudes a come-hither draw that's hard to ignore. This concentrated chunk of commerce is the result of a tenacious developer's effort to redevelop a tawdry block of vacant and struggling storefronts into the city's newest entertainment and housing district. The New York Times called it a "prime example of 21st-century urban redevelopment in the Midwest."